Who Wants To Run A Marathon With Me? 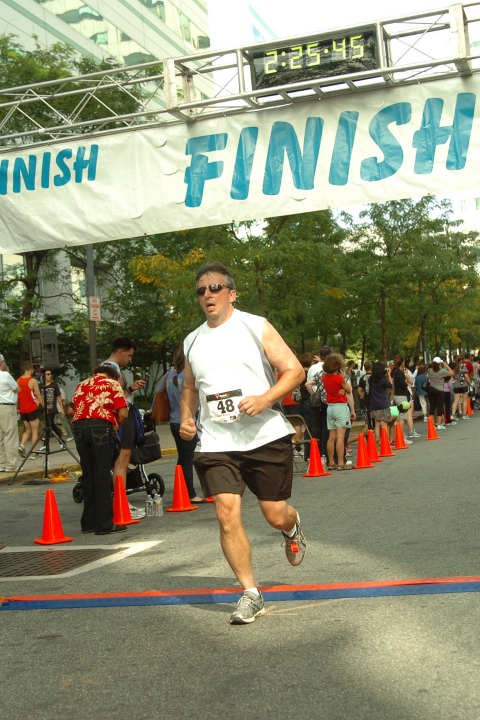 After running the half marathon back in September, I learned a lot about preparation and also recovery.  In retrospect, I realize I did not train properly.  I trained – but I did it only half way.

Hurting the ankle wasn’t the worst thing in the world. Day to day it didn’t bother me too much. Only when I tried to run did it remind me it was there.

After 2 weeks I thought it was all better so I did a 11 mile run – only to come away with a heel spur or something. Let me tell you – that has been worse than the ankle 🙂

So I am learning. Since that 11 mile day I have mostly run 3 and 4 milers with an occasional 5 miler thrown in. Each run had its own challenges. Lower back aches, favoring the left enough to cause pain in my right knee… you get the idea.

Like I said – I am learning.  I’ve toned down a bit and run less days – 2 to 3 lately instead of 5. It’s helping too. My heel is about 90% now and today I did a six mile run relatively pain free.

I say relatively because I AM 47, have arthritis in both knees and still have MINOR irritation in my left heel.

Ok, so what is this Marathon thing I mentioned in the title?

In my “About Me” page, when I started this blog I challenged myself to run in the NYC Marathon this year. But early on I decided the goal was not realistic for me. In fact, I was not even running regularly at that point. I made this goal so I could run for charity in the name of my niece who died 3 years ago from colon cancer.

I ended up buying a bicycle and was thoroughly enjoying riding. In fact, a friend of mine who rides regularly wanted me to join him in a 50 mile ride.  But something happened…

In May I started running. Hitting my first 3 mile run was exhilarating for me. Something achieved… and it pushed me further until after only 4 months I did the half marathon.

Now, injuries aside, the accomplishment made me realize that I COULD achieve my marathon goal. It was no longer something I considered out of reach.

After injuring myself I also realized I would have to properly train. I will find a running coach when the time comes.

So here’s what I want to know. Do you want to run in the marathon with me?

I want to start a running “team” for charity and run in my nieces name. So I am putting the word out almost a year in advance and I want to know… who wants to do this?

There’s a few people out there whose arm I am going to twist… but I truly believe that pretty much anyone can set this goal and achieve it. I know 100% that if I had trained properly for the half I would not have injured myself and I COULD have run in the NYC Marathon. So next year I will.

In the meantime – keep on running.